Gamble Family Vineyards is home to some of the most talented and passionate people working in the Napa Valley today. From our tireless production crew to our vivacious hospitality team, every part of our experience is made possible by the people behind the scenes. Read on to learn a little bit more about our Proprietor Tom Gamble, our winemaking team, our hospitality team and a few friends who have inspired us along the way.

Tom Gamble’s (ad)venture in wine can be seen as a natural progression of history. As a third generation Napa farmer, he has been influenced all his life by his forebearer’s lives in agriculture. As part of their legacy, they left a deep and abiding affinity for the land from which came not only their livelihood, but a life full of purpose. Given such a legacy, one would not continue farming for dispassionate reasons alone – there are easier ways to make a living. Thus, the decision to put one’s family name on a bottle of wine does not come lightly.

It was in 1981 that Tom first began farming professionally, while still attending the University of California at Davis. Gamble Family Vineyards first appeared on a bottle of wine with the 2005 vintage – Tom hasn’t looked back since. 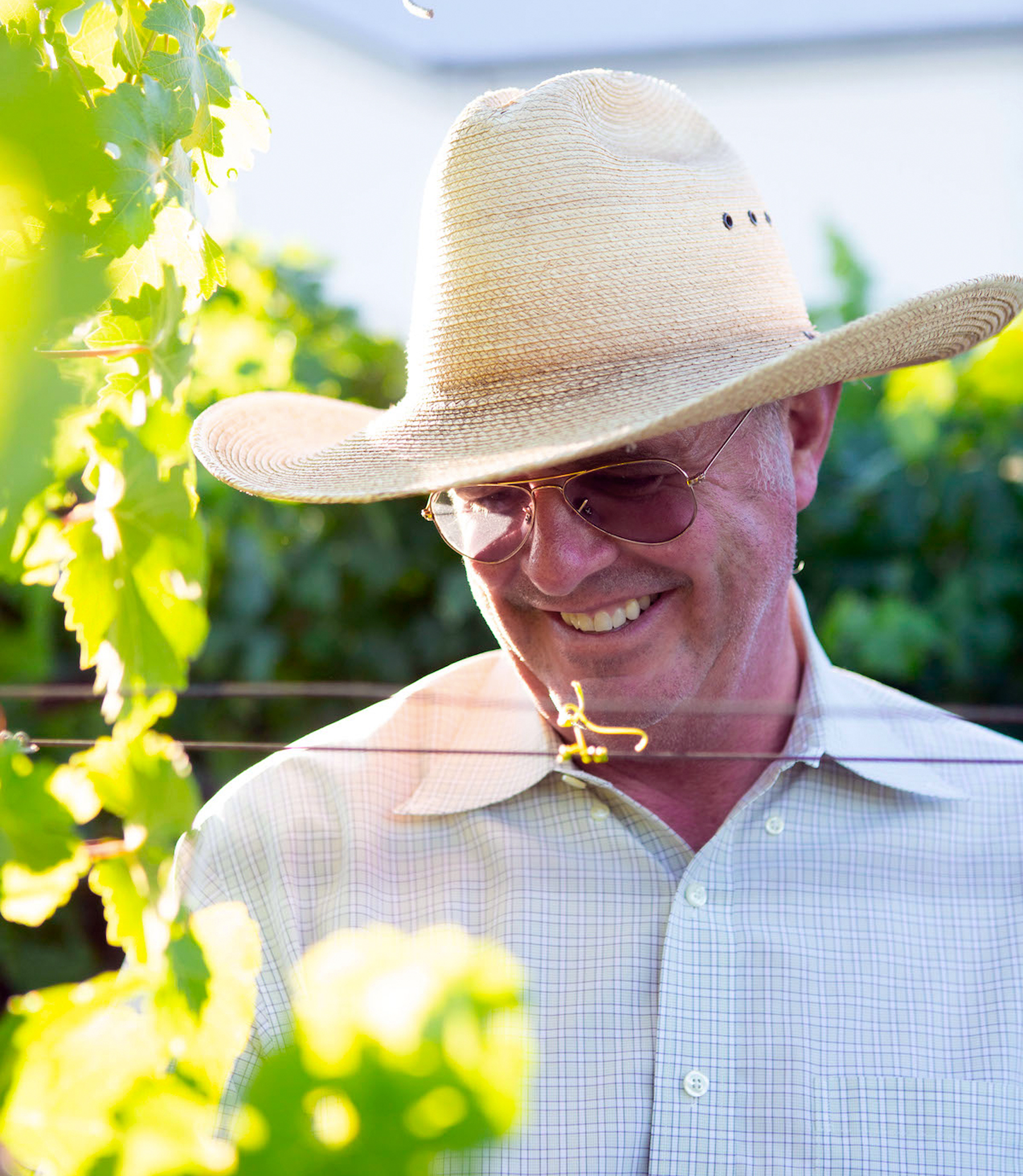 Melka is considered one of Napa Valley’s most respected winemaking consultants and comes to Gamble with more than 25 years of winemaking experience in the Napa Valley. He was trained and influenced by some of the most notable personalities in the wine business such as Jean Delmas and Jean Philippe Masclef from Haut-Brion, Christian Moueix and Jean Claude Berrouet from Petrus, Paul Draper from Ridge, Daniel Baron from Silver Oak, and the globetrotting wine consultant Michel Rolland.

Koschitzky was born and raised in Israel where he practiced judo from the age of four until he joined the army at the age of 18. He got his start working at some of the leading wineries in Israel, including Margalit Winery. Koschitzky moved to Napa in 2011 and has amassed an impressive winemaking resume spanning Screaming Eagle to Dalla Valle, working alongside some of the top winemakers and among the most coveted terroirs in the world.

At Gamble Family Vineyards, one of our biggest sources of pride, is the outstanding attention to detail and service offered by our Hospitality team. Our Private Client Managers Melissa Bandel, and Ania Gatto, and our Director of Hospitality Kendall White (pictured) along with Brand Ambassadors Eliza Kaufman, Francesca Carpello, and Dax Cargill work around the clock to ensure that every visit, every sip, every email is a pleasure. 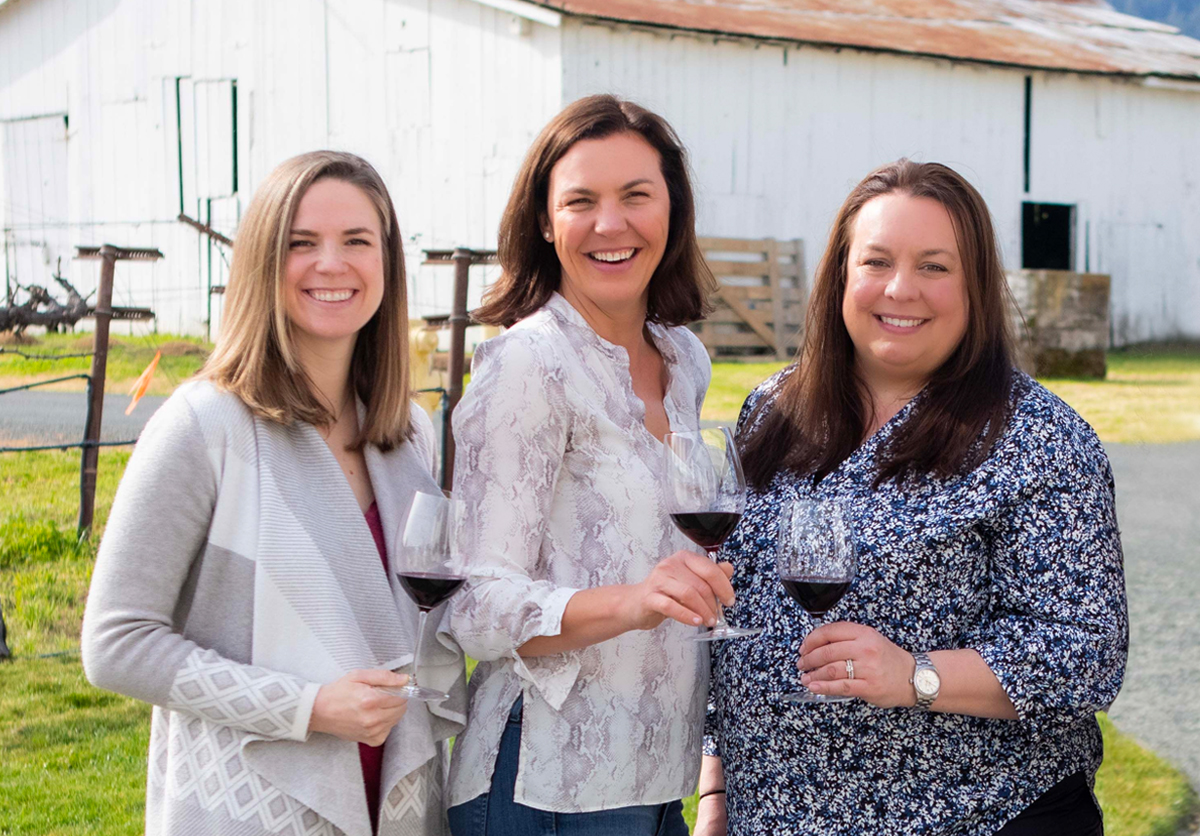 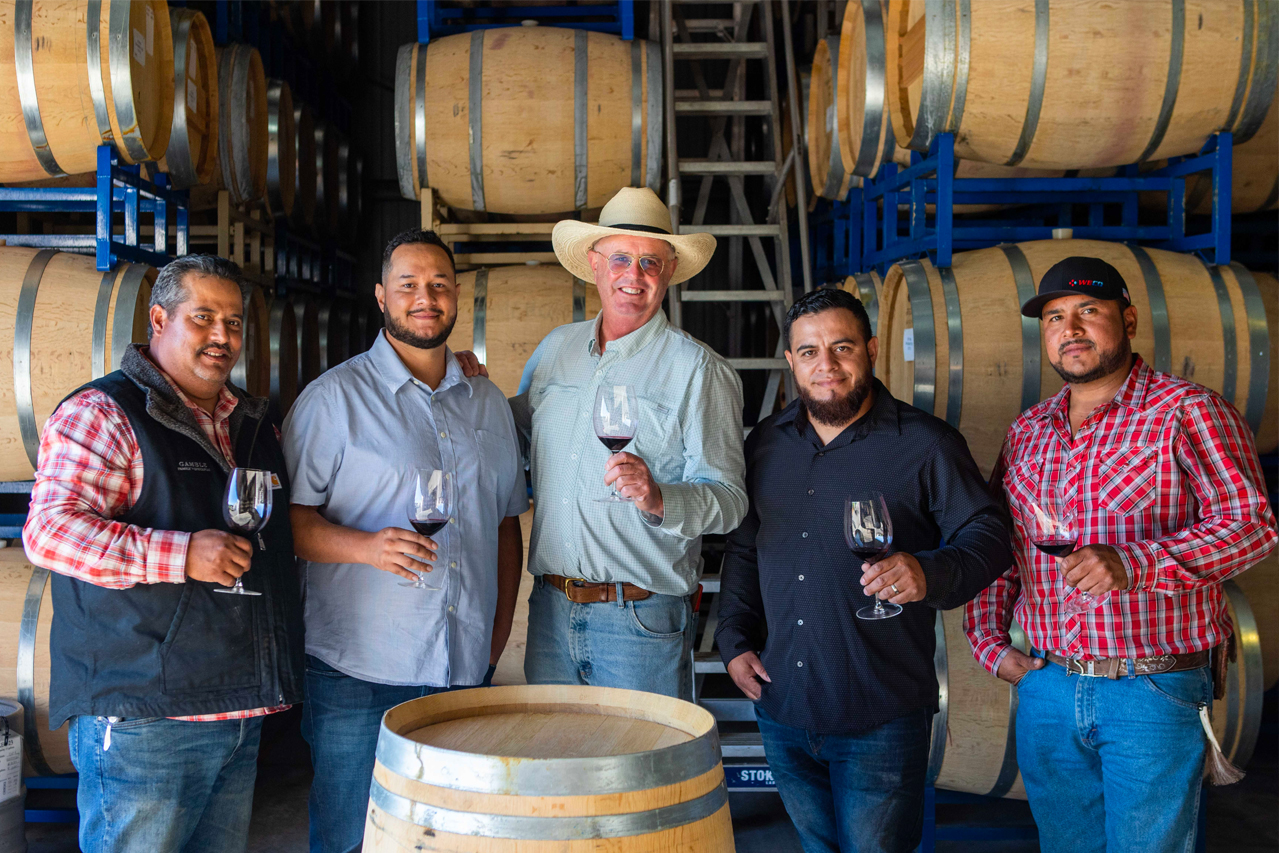 Our tireless production team is made up of some of the finest talent the Napa Valley has to offer. Philippe Melka and Maayan Koschitzky have the invaluable support of Assistant Winemakers Lomber Mora and Jaime Medina, as well as our talented cellar team of Juan Borrayo and Carlos Villa-Ortiz.

When the Gambles sought a baby brother for their dog Cairo, it was undeniable that rescuing another four-legged friend would be their fate. Enter Koa, a pup with a checkered past. The two dogs were soon introduced and the family instantly agreed Koa would be a perfect addition to the clan.

Following in Cairo’s paw-steps, Koa is by Tom’s side wherever he goes. It’s not unusual to see Koa and Tom on the ATV riding across the vineyards at sunset – cowboy hat on one, a wide grin on the other. 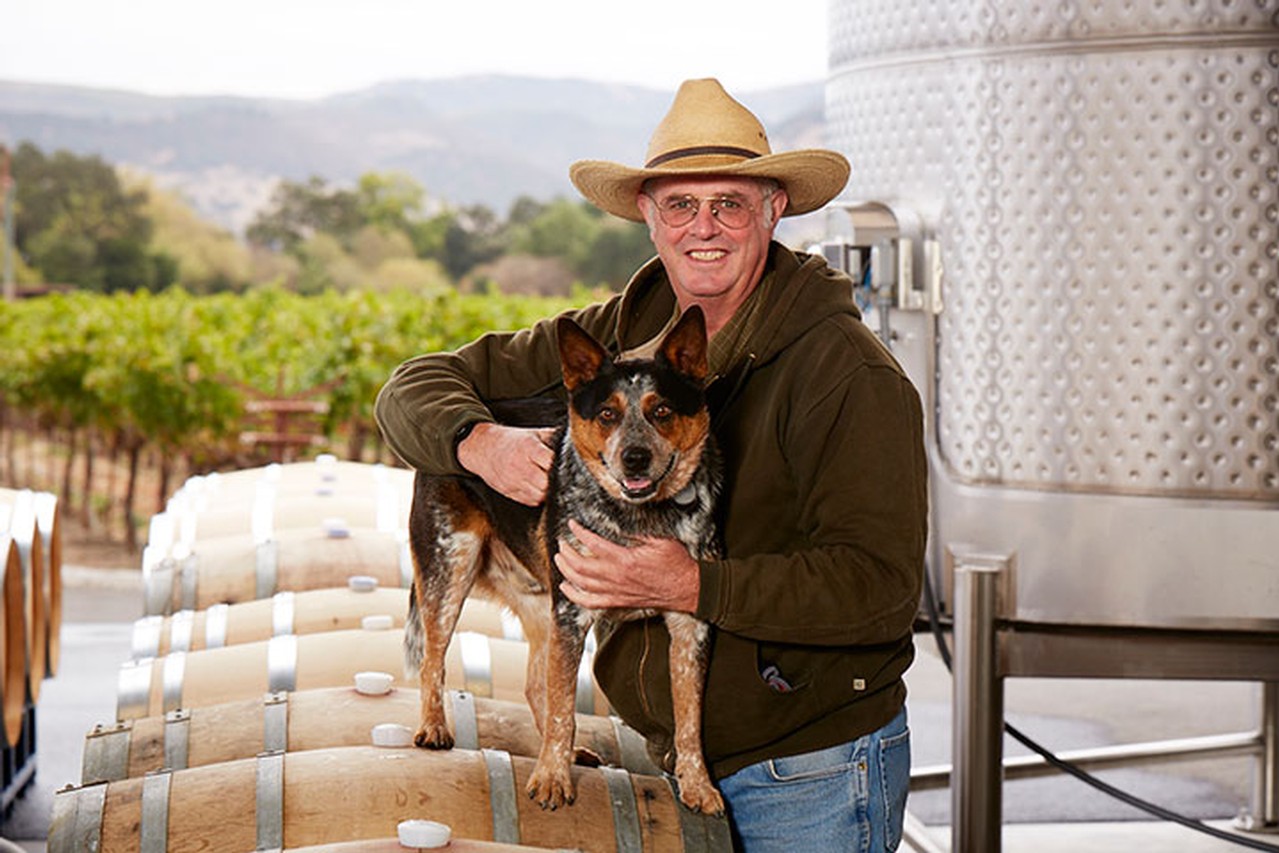 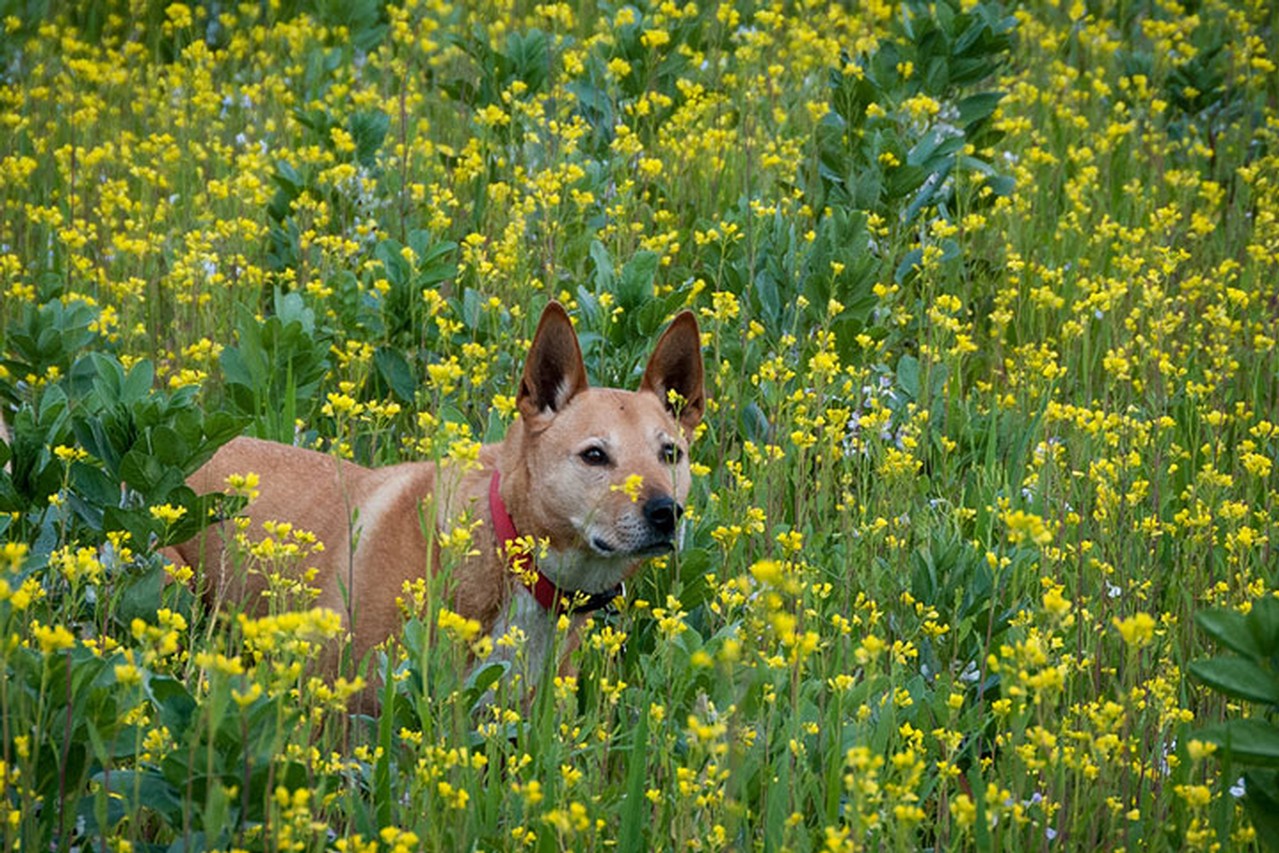 On a drive to his father’s ranch on April 27, 1999, Tom spotted a frantic young pup who looked as though he needed a friend. Pulling up alongside the mutt, whose coat had a reddish sheen, Tom opened the door to his truck and in the dog jumped. “I’ll name him Red!” Tom thought. But upon meeting the rest of the family, the pup’s pointed, Egyptian Pharaoh Hound like ears stole the show. From that day forward, he was called Cairo.

Today you will find Cairo memorialized in our vineyards and in our wines. His likeness is perched high above the winery as a weather vane silhouette, ensuring we honor the lands he protected.